← In Defense of Progesterone: A Review of the Literature
How does COVID affect the brain? Two neuroscientists explain →

Poor gut health can lead to these chronic diseases

Poor gut health can lead to these chronic diseases

Recent studies have shown that certain diets can lead to poor gut health—which, in turn, can increase the risk of several neurodegenerative diseases and other chronic conditions. 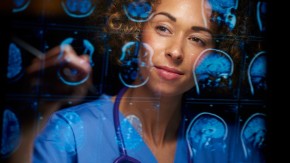 Research increasingly shows that gut health plays a role in the development of brain diseases.

According to a recent review published in the Journal of Neuroinflammation, evidence is mounting that the microbiota in your gut can influence cognitive dysfunction, neurodegeneration, and the pathogenesis of certain cerebrovascular diseases. Gut microbiota can prompt the activity of cytokines and inflammation in the central nervous system, which can lead to an increased risk of developing brain conditions like depression, Alzheimer disease, autism, stroke, and more.

Authors of the review cite studies that have shown that gut health plays a role in “bidirectional brain-gut signaling through humoral, neural, and immunological pathogenic pathways.” Bacteria in the gut are altered by the kinds of foods you eat, among other factors, resulting in the production of neurotransmitters or neuromodulators in the intestine, which affect the central nervous system.

Moreover, studies using animal models have indicated that gut microbiota can affect the blood-brain barrier (BBB). For example, experiments using rodents indicate that a loss of “normal intestinal microbiota” can lead to increased permeability of the BBB, while a pathogen-free microbiota can boost BBB functionality.

While further research is required to fully understand the relationship between gut health and brain health, currently available evidence indicates that what you eat affects your gut microbiome, which affects your chances of developing certain conditions.

Based on current research, here are five diseases spurred by poor gut health, and how to tailor your diet to avoid them.

According to the aforementioned review, gut microbiota play a large role in the development of depression, stress, and anxiety.

While neurodegenerative diseases are characterized by the loss of neurons, one of their common features is neuroinflammation and higher intestinal permeability. According to the aforementioned review, gastrointestinal disorders are closely linked to these conditions, including Parkinson disease (PD).

Researchers noted that PD is associated with a range of intestinal dysfunctions, and that bowel inflammation can lead to neuroinflammation, which prompts dopaminergic neuronal loss. Evidence suggests that butyrate-producing and anti-inflammatory bacteria (like Blautia, Coprococcus, and Roseburia) tend to be found in significantly lower quantities in PD patients, while the pro-inflammatory Ralstonia is increased.

Studies have recently illuminated the role that microbial dysfunction plays in the activation of neuroinflammation and the formation of amyloids in the brain, both of which characterize Alzheimer disease (AD).

According to the Journal of Neuroinflammation review, the release of lipopolysaccharides (which are found in the outer membrane of gram-negative bacteria) has been found to trigger inflammation and promote amyloid fibrillogenesis in the brain. The authors also noted that the presence of bacterial metabolites in the gut has been shown to worsen AD. Conversely, research shows that probiotics (like Lactobacilli and Bifidobacteria) may improve symptoms of AD, including memory and learning dysfunction, in animal models.

While it’s commonly known that environmental factors, like obesity and smoking, can contribute to the pathogenesis of multiple sclerosis (MS), the review notes that changes to the microbiome and prevalence of “leaky gut” are often found in MS patients.

The authors of the review cite a small study, which found that poor gut microbiota profiles (for example, those with an abundance of Fusobacteria) were associated with increased risk of relapses in MS patients. Other studies have found that certain bacteria are commonly found in increased amounts in MS patients, implying that changes in the intestinal microbiota ecosystem are linked with the development of MS.

Finally, the review states that gastrointestinal microflora and infection have been linked with the immune system and, in turn, ischemic stroke processes.

The authors cite a study which demonstrated that treatment with antibiotics can increase regulatory T cells and assist in the trafficking of effector T cells following the occurrence of a stroke. Other research suggests that increases in gram-negative bacteria can increase risk of stroke.

Tailor your diet to protect your brain

Diets rich in fruits, vegetables, whole grains, and fish, like the Mediterannean-style diet or the DASH diet, have been shown to benefit brain function and lower the risk of neurodegenerative diseases by lowering gut inflammation.

On the other hand, a diet that’s high in sugars, saturated fatty acids, and animal proteins, has been shown to increase levels of bacteria like Firmicutes and Proteobacteria, which in turn increase the risk of brain dysfunction.

Posted on August 18, 2021, in Uncategorized. Bookmark the permalink. Comments Off on Poor gut health can lead to these chronic diseases.

← In Defense of Progesterone: A Review of the Literature
How does COVID affect the brain? Two neuroscientists explain →