Aging is a slow process of physiological deterioration, characteristic of all living things. In humans, age increases the risk of various degenerative diseases, including diabetes, Alzheimer disease, cancer, and heart disease. 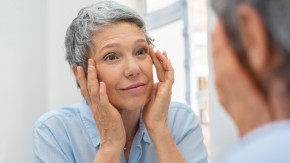 Aging is an inevitable process, but some foods can prevent the deteriorating health effects of getting older.

“Aging at the biological level is distinguished by the accumulation of cell and molecular damage resulting in functional and structural changes in tissues and cells, such as impaired intercellular contact, senescence, loss of mitochondrial homeostasis, and reduced regenerative ability,” wrote the authors of a review published in Antioxidants.

But some of these damaging effects of aging can be prevented or mitigated by eating certain foods that have anti-aging properties, according to research. Let’s consider the following five examples

Fruits are nature’s form of dessert. In addition to tasting sweet, they have elevated concentrations of polyphenolic compounds—ie, plant “secondary metabolites,” which harbor antioxidant properties that act as free-radical inhibitors and decrease oxidative stress. Polyphenols prevent aging and age-related diseases, note the authors of the aforementioned Antioxidants review. Moreover, other antioxidant bioactive species found in fruits also ward off reactive-oxygen species, including catechins, anthocyanins, and isoflavones.

According to the review authors, “Frequently consumed fruits, particularly apples, grapes, berries, oranges, and cherries, contain different polyphenolic compounds that have a beneficial impact on human health. The presence of high bioactive content in these fruits aid[s] in delaying the processes of aging and alleviates the risk of various age-linked chronic disorders like CVD and cancer.”

This form of fungi is famous for its ability to take over insects, directing them to do their reproductive bidding. But, Cordyceps is also sold in specialty stores as a food, which is good news because it has plenty of anti-aging and health benefits.

According to the authors of a review article published in Frontiers in Pharmacology, “Cordyceps species, its extracts, and bioactive constituents have been related with cytokine production such as interleukin (IL)-1β, IL-2, IL-6, IL-8, IL-10, IL-12, and tumor necrosis factor (TNF)-α, phagocytosis stimulation of immune cells, nitric oxide production by increasing inducible nitric oxide synthase activity, and stimulation of inflammatory response via mitogen-activated protein kinase pathway.”

A substance secreted by honey bees and fed to bee larva, royal jelly (RJ) has been consumed by humans to treat disease since ancient times.

A preclinical study, in which peripheral mononuclear blood cells (PBMCs) were taken from 10 healthy volunteers, found that royal jelly could mitigate the immune effects on aged PMBCs and the immune system.

Publishing in the Journal of Food Biochemistry, the authors stated, “The present study illustrates the anti-aging and stimulatory effects of the fresh RJ [royal jelly] whole extract, from local Algerian honey bee: Apis mellifera intermissa, on the immunity of aged men. This study provides experimental evidence supporting anti-immunosenesence effects of royal jelly. RJ supplementation can be used in the old age management and human age-related complications, especially, associated with the weaknesses of the immune response.”

Testing the effects of traditional Korean fermented foods in nematode animal models, the researchers discovered that Bacillus subtilis could mediate health benefits and serve as a useful probiotic.

Despite its name, seaweed is not a plant but rather a marine algae. It is rich in nutrients, fibers, vitamins, minerals, polyunsaturated fatty acids, and other bioactive compounds.

“The health benefits of seaweeds include, but are not limited to, antioxidant, anti-inflammatory, and anti-obese activities,” wrote the authors of a review published in Marine Drugs. ”Interestingly, a body of studies shows that some seaweed-derived extracts or isolated compounds, can modulate these aging-regulating pathways or even extend lifespans of various animal models.”

Posted on July 5, 2021, in Uncategorized. Bookmark the permalink. Comments Off on Foods with anti-aging properties.