In today’s working world, many of us are sitting most of the day in front of our computer—especially with the shift to telemedicine appointments. Research indicates that those in office-based professions spend 70%-85% of their workday seated—and all of that sitting is detrimental to our cardiovascular, metabolic, and mental health, according to a recent study published in BMC Musculoskeletal Disorders. 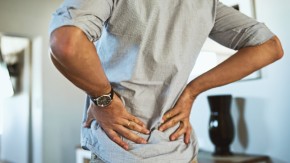 Sitting for prolonged periods of time is worse for your health than you think.

The pandemic has made matters worse. Reports point to decreases in physical activity in general since the virus prompted lockdown restrictions and stay-at-home orders. One study found that more than 40% of US adults were sitting for more than 8 hours a day during April 2020.

Does so much sitting really translate to worse health? How does it affect the body and the mind? Here’s how this sedentary lifestyle changes us, according to the latest research.ADVERTISEMENT -SCROLL TO KEEP READING

The health impacts of being sedentary

Evidence suggests that not using our bodies for long periods of time takes a toll on our well-being. Prolonged periods of sitting have been linked to metabolic disorders like increased blood pressure, high blood sugar, obesity, and high cholesterol levels, according to the Mayo Clinic. Extensive periods of sitting are also associated with an increased risk of cardiovascular disease and cancer mortality.

A review published in The Lancet found that those who sit for more than 8 hours a day with no physical activity had a mortality risk similar to that caused by obesity and smoking.

According to the BMC article, prolonged sitting is also associated with type 2 diabetes incidence and all-cause mortality. Other studies have demonstrated that sitting can lead to musculoskeletal problems such as neck and shoulder pain.

Why you should get moving

The good news? Countering these negative effects is simple, at least in theory. You need to stay active. The authors of the aforementioned Lancet study analyzed data from more than 1 million subjects and found that those who engage in 60-75 minutes of moderate-to-intense physical activity a day effectively ameliorated the adverse outcomes of prolonged sitting.

Other research has found that even just replacing some of your sitting time with standing can help. One review published in Mayo Clinic Proceedings examined nine clinical trials focused on the effects of standing rather than sitting on factors including fasting blood glucose, fasting insulin, and lipid levels; blood pressure; body fat mass; weight; and waist circumference. The average difference in standing time between the control group and the intervention group was 1.33 hours per day. While they didn’t observe major differences in every outcome measured, researchers did find that those who spent more time standing had significantly lower body fat mass values and fasting blood glucose levels. They concluded that replacing a few hours of sitting with standing could be used as an adjunctive intervention to help mitigate cardiovascular risk factors and assist in preventing diabetes.

Similarly, the BMC review concluded that breaking up periods of prolonged sitting with standing or light exercises could help mitigate the ill effects of too much sitting. The review examined the range of physiological mechanisms affected by sitting for too long and hypothesized that some of these factors may be affecting cognitive function.

Intermittent standing or low-to-moderate physical activity may improve cognitive function by mitigating the adverse vascular and hormonal changes that result from too much sitting, they found. Breaking up prolonged periods of sitting was shown to have positive effects on postprandial hyperglycemia, insulin resistance, inflammatory markers, the regulation of hormones like cortisol, and cortical and peripheral arterial blood flow. The authors linked all of these mechanisms to possible improvements to cognitive function.

To mitigate the risks of too much sitting, experts advise following the US government’s Physical Activity Guidelines for Americans, which states that everyone should get a minimum of 150 minutes of physical activity per week.

Beyond this, we should take a break from sitting every 30 minutes and find ways to fit in more standing and walking throughout the day, according to the Mayo Clinic. Tips include: Stand while you talk on the phone or watch TV; try working at a standing desk; hold “walking meetings” with colleagues, rather than sitting around a conference table; or (for the adventurous) set up a treadmill at your workstation, so you can stay active throughout the day.

If you need an extra push, you might find some useful tips in the findings of a study published in BMJ, which analyzed the impact of a multicomponent intervention to reduce sitting time. Subjects received a height-adjustable workstation, informational seminars and training sessions, and even a vibrating timer-cushion to remind the subjects that they’d been sitting for too long. Researchers found that, after 1 year, those in the intervention group were sitting for an average of 83 minutes fewer per day than the control group. Additionally, subjects in the intervention group reported improvements in job performance, work engagement, occupational fatigue, daily anxiety, and quality of life.

For those who find themselves sitting for prolonged periods, the evidence suggests you should probably swap out your current workstation for a standing desk, and if you’ve got a day of pencil-pushing and keyboard tapping ahead, make sure you take regular breaks.

Posted on April 7, 2021, in Uncategorized. Bookmark the permalink. Comments Off on The common activity that’s worsening your health.