Best preventive ‘medicine,’ and it’s not what you think

ew AJM article cites best preventive ‘medicine,’ and it’s not what you think

When it comes to preventive medicine, you might think of healthy behaviors like eating well, taking vitamins, getting enough sleep, or seeing your doctor or dentist for regular check-ups. So it may surprise you to learn that a recent article in the American Journal of Medicine (AJM) has identified the best preventive “medicine” for a variety of maladies. 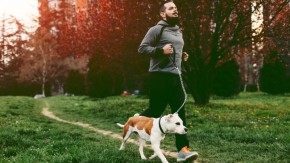 Here’s one surprising form of preventive “medicine” every doctor should know about.

The “medicine” in question? Dogs. Yes, you read that right. Dogs.

According to the article, our pet dogs offer us more than companionship and joy—they provide a whole range of health benefits.

Our furry friends became the first animals we domesticated between 20,000-40,000 years ago; today, there are roughly 89 million pet dogs in the United States. According to a 2019/2020 pet owner survey, more than 63 million households in the United States have at least one dog.

And that’s a healthy trend, according to research.

“Whether [dogs] are terrestrial angels without wings (as many believe) or a highly-evolved species of wolf with an instinctive love of humans, their well-documented mental and physical health benefits should strongly encourage physicians to recommend dog ownership to their patients,” the author wrote.

Evidence is robust enough that the CDC has jumped on the canine bandwagon, noting that having a dog is linked to lower cholesterol levels, lower blood pressure, decreased triglyceride levels, less loneliness, and more.

Here’s a look at the research behind why dog ownership is great for physical and mental health.

Sometimes dogs leave us no choice but to get up and go—and such physical activity can be great for our health. According to the AJM article, more than half of all preventable deaths result from poor lifestyle choices, and lack of physical inactivity is at the top of that list.

Research shows that exercising regularly can significantly reduce all-cause mortality, cardiovascular disease, and cancer mortality. Working out has been shown to help combat or prevent 26 chronic conditions, including hypertension, type 2 diabetes, cognitive decline, and others.

Evidence indicates that dog ownership is strongly associated with lowering risks of cardiovascular conditions and mortality. In short, having a dog means more frequent walks.

“Credible evidence demonstrates that owning a dog, with its walking obligation, is strongly associated with a lower risk of cardiovascular conditions and death (hazard ratio = 0.77, 95% confidence interval = 0.73-0.80),” wrote the author.

In fact, studies show that dog owners are four times more likely to achieve the 150 minutes per week of physical activity that’s recommended as a minimum by the US government’s Physical Activity Guidelines for Americans.

Past studies have reached the same conclusion. One review published in the Journal of Physical Activity and Health examined 29 studies and found that roughly two-thirds of dog owners walk an average of 160 minutes per week and a median of four times per week. Another study, published in BMC Public Health, suggested that those who have a dog walk an average of 22 minutes more per day than those who don’t—and they sit around less, too.

Rates of some immune-related conditions (from asthma to multiple sclerosis) are still on the rise, likely as a result of improvements in sanitation, vaccines, and antibiotics—eliminating some of the microorganisms that have kept our immune systems in balance. According to the author of the AJM article, this appears to have resulted in a trend of overstimulated immune systems, which mistakenly attack proteins like pollen or peanuts, or even the body’s own tissues. As it stands, around one in five children live with asthma and allergies, or autoimmune disorders like Crohn disease, lupus, MS, and others.

Dogs, however, could be the antidote to this. The author noted that dogs share a number of “favorable microorganisms,” which live on their fur and in their mouths, with children. Exposure to these microbes can help protect against allergic diseases. The article cites a study that examined children living on farms, in close proximity to bacteria in barns and on animals, and found that these kids were far less likely to develop allergies or autoimmune diseases in comparison to nonrural children.

Even prior to the lockdowns and social restrictions of the coronavirus pandemic, mental health issues were prevalent, the author noted. Before COVID-19, the National Academies of Sciences, Engineering and Medicine reported that more than a third of adults 45 years and older felt lonely, and a quarter of those 65 or older were considered socially isolated. These conditions don’t just impact people’s emotional states, they can impact physical health, too. According to the AJM article, “loneliness and social isolation are significantly associated with a 50% increased risk of dementia, 29% increased risk of heart disease, 32% increased risk of stroke, and a greater risk of all causes of premature death.”

The companionship of living with a dog can help mitigate this. The author noted that dog ownership is associated with reduced rates of depression and can particularly help for subgroups like single individuals, homeless youth, older individuals who’ve lost a spouse, and elderly women.

For example, service dogs have been assigned to those with post-traumatic stress disorder (PTSD), and there’s plenty of evidence that this practice helps, the author wrote. PTSD can lead to depression, substance abuse, and suicidal tendencies, and it impacts roughly 14% of all military veterans returning from war zones. Research has shown that having a service dog can significantly reduce the symptoms of PTSD and can lead to increased social interaction in general.

Posted on March 22, 2021, in Uncategorized. Bookmark the permalink. Comments Off on Best preventive ‘medicine,’ and it’s not what you think.