← The FodMap diet
Non Drug treatment for anxiety and depression →

Are these depression medications overprescribed?

Are these depression medications overprescribed?

Later this week I will post information about how you can access CBT online and at no cost. Evidence shows that this is just as effective as seeing a specialist (More convenient, and less expensive as well)

Psychotropics are some of the most widely prescribed medications in the world. During the past few decades, the use of antidepressants has skyrocketed. This increase in prescription has been met with debate by experts who question whether overprescription is at play. 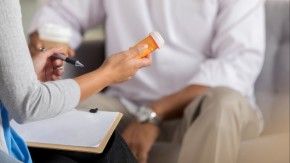 Antidepressant use is on the rise and some research shows these drugs are being overprescribed.

According to a literature review published in Trends in Psychiatry and Psychotherapy, “It has been suggested that overprescription of antidepressants is fueled by the increase in the incidence of depression, stress and anxiety, or due to the way psychotropic medications are marketed.”

They added, “However, regardless of the validity of the said reasons, another explanation could be suggested: psychiatric disorders, namely depression, are being overdiagnosed on a considerable scale, probably leading to a list of significant adverse consequences that mostly affect the most vulnerable groups of patients. At the end, further rigorous research should certainly be undertaken to examine the extent and cost of overprescription of psychotropic drugs in society.”

Compared with placebo, antidepressant treatment yields additional symptomatic relief in 25%-30% of adults diagnosed with major depressive disorders, according to a literature review published in the Journal of Clinical Medicine Research. These results are especially true for selective serotonin reuptake inhibitors (SSRIs). The same holds for benefit with respect to anxiety disorders.

With maintenance therapy, however, the results are less convincing. The review author cited high-powered research indicating that adults with major depressive disorder who started a 1-year course of antidepressant therapy averaged a 34%-50% relapse rate during this maintenance period, which the author noted was “strikingly high.”

Also, according to the literature review, only 15% of adults aged 65 years or older who took antidepressants met the diagnostic criteria for major depressive disorder during the previous year. In fact, few patients treated with antidepressants experienced the requisite number of symptoms to be diagnosed with the condition, with those with subthreshold symptomatology responding in a marginal manner at best. Moreover, 27% of those patients aged 12 years and older had been taking long-term antidepressants—for 10 or more years.

These data are concerning because, as with any other drug, antidepressants pose the risk of adverse effects. These include decreased sexual function, type 2 diabetes, weight gain, low bone density, and hypertension. To boot, at least 35% of those taking the drugs for 6 weeks or more experience withdrawal when drug dosages aren’t properly tapered. On a related note, antibiotics can impact the microbiome in ways that facilitate serious chronic illness.

It appears that the brunt of antidepressant overprescription occurs in elderly populations, according to the results of a study published in Pharmacology Research & Perspectives.

Researchers mined Minnesota health records for antidepressant prescription patterns in elderly patients between 2005 and 2012. Overprescribing was abstracted based on factors including expert review.

They found that potential antidepressant overprescription happened in 24% of 3,199 cases, concluding that this was “associated with nursing home residence, having a higher number of comorbid medical conditions and outpatient prescribers, taking more concomitant medications, having greater use of urgent or acute care services in the year preceding the index antidepressant prescription, and being prescribed antidepressants via telephone, e‐mail, or patient portal.”

They added that this overprescribing pattern “occurred in elderly persons and involved mainly newer antidepressants used for non‐specific psychiatric symptoms and subthreshold diagnoses, and was associated with indicators of higher clinical complexity or severity and with prescribing without face‐to‐face patient contact.”

Instead of prescribing psychotropic medications, cognitive behavioral therapy (CBT) could be used to treat mental illness, according to experts. CBT explores the relationships among feelings, thoughts, and behaviors, with the therapist uncovering unhealthy patterns of thoughts, and providing insight into how they lead to harmful behaviors and beliefs. This insight allows the therapist and patient to work together to develop constructive ways of thinking that yield healthier behaviors and outcomes. In sum, CBT replaces negative thoughts with positive ones via training.

According to the National Alliance on Mental Illness, “Studies of CBT have shown it to be an effective treatment for a wide variety of mental illnesses, including depression, anxiety disorders, bipolar disorder, eating disorders, and schizophrenia. Individuals who undergo CBT show changes in brain activity, suggesting that this therapy actually improves your brain functioning as well.”

They added, “Cognitive behavioral therapy has a considerable amount of scientific data supporting its use and many mental health care professionals have training in CBT, making it both effective and accessible. More are needed to meet the public health demand, however.”

Posted on February 22, 2021, in Uncategorized. Bookmark the permalink. Comments Off on Are these depression medications overprescribed?.

← The FodMap diet
Non Drug treatment for anxiety and depression →