← Could coffee be the secret to fighting obesity?
The pill effects adolescent bone development. →

For a long time, the general consensus among health experts was that we should limit what we consume in the hours before going to sleep. Eating or drinking before bedtime would add extra calories and increase the risk of cardiovascular disease and diabetes. While this may be true when you eat a smorgasbord shortly before wobbling to bed, researchers are now finding that consuming smaller amounts of specific foods (eg, protein) can have positive physiological benefits before bedtime. 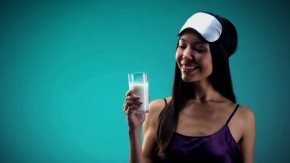 Accordingly, having a soothing beverage before sleep is not only a relaxing bedtime ritual, it can also improve your sleep and even help you lose weight—depending on what you drink. Here are six bedtime beverage that may do just that:

As noted above, having protein before bed—especially if you’ve worked out beforehand—helps stimulate the repair and rebuilding of muscle (muscle protein synthesis) while you sleep. The more muscle you have, the more calories your body burns.

Dairy is a particularly comforting source of protein, especially for children. (Do you remember your mom giving you warm milk to help you get back to sleep?)

Milk (whether warm or cold) contains calcium and tryptophan, which have both been shown to improve sleep quality. Milk also contains two kinds of dairy protein—whey and casein. Bodybuilders are known to consume whey protein after workouts because it quickly builds muscle mass. Casein protein, however, is a slow-releasing protein better suited for building muscle over the long run.

“Consuming casein protein (~30–40 g) prior to sleep can acutely increase muscle protein synthesis and metabolic rate throughout the night without influencing lipolysis,” the International Society of Sports Nutrition stated in a position paper.

A good source of casein is Greek yogurt. A Greek yogurt shake before bedtime delivers a healthy dose of casein protein that supplies a steady delivery of amino acids for muscle recovery. Plus, a yogurt shake can make for a tasty, soothing bedtime beverage. SEE ALSOAvoid these 7 less-than-healthy fruits and veggies

Chamomile is a known sedative, albeit a mild one. (In fact, chamomile is listed as an official drug in the pharmacopeias of 26 countries, including Germany, Belgium, France, and the United Kingdom.) It increases the body’s levels of glycine, a neurotransmitter that relaxes your nerves and makes you feel sleepy. In addition, chamomile is good for settling an upset stomach. So, a warm mug of chamomile tea is perfect for relaxing you for bedtime.

Chamomile has also been linked to improved glucose control and weight loss. Researchers have identified four compounds in chamomile that, taken together, can modulate carbohydrate digestion and sugar absorption.

Resveratrol, the famed antioxidant in red wine, can turn the body’s excess white fat into the active, energy-burning beige fat. But, who wants “beige fat”

Researchers had long believed that there were only two types of fat in the body–white fat, where lipids are stored as energy, and brown fat, which burns lipids to produce heat. Scientists have since discovered beige fat, which is generated from white fat but can burn energy similar to brown fat. Resveratrol can enhance this conversion of white fat to beige fat; at high rates, it can prevent obesity.

Resveratrol is a naturally occurring compound found in red grapes, blueberries, strawberries, raspberries, and apples. Resveratrol is but one of a number of antioxidants produced in these fruits. These compounds enhance the oxidation of beige fat and burn off the excess as body heat.

One glass of red wine before turning in for the night can also help you unwind. Just don’t overdo it—the alcohol in more than two glasses can disturb your sleep.

Kefir is a cultured, fermented drink typically made from dairy milk. It’s rich in probiotic bacteria and it’s a good source of calcium. Kefir has a tart, tangy taste–similar to yogurt–but it has a thinner consistency than yogurt, so it’s more like a drink.

Researchers have suggested that the probiotics in kefir can modulate gut microbiota, which inhibits lipogenesis and promotes fatty acid oxidation. This, in turn, may reduce body weight and prevent obesity. SEE ALSO5 ‘diet’ foods that can cause weight gain

If kefir or Greek yogurt isn’t your thing–if you’re lactose intolerant, for instance, or on a vegan diet–or if you just want to mix things up a little, a soy-based protein shake can deliver the protein punch while also promoting weight loss. Researchers have shown that soy protein is just as beneficial as other kinds of protein as part of a weight-loss program.

In addition, soy has been studied extensively for its heart-healthy benefits. Some investigators have suggested that soy imparts this cardioprotective benefit through a reduction in body fat. In one weight-loss study, researchers showed that soy foods, in place of other foods, were associated with weight loss and improvements in cardiometabolic risk, without loss of physical function or strength

Soy is also rich in amino acids, not the least of which is tryptophan, to help you drift off to sleep.

The one problem with all the drinks discussed above is that they all contain at least some calories. Water, on the other hand, contains zero calories, which gives it a leg up against any other beverage in minimizing calorie intake.

Plus, drinking more water has been linked to more restorative sleep and less daytime sleepiness. “These results suggest that drinking more water, which is a behavior associated with a number of health benefits, may also be associated with healthy sleep,” wrote researchers in the Journal of Sleep Research, who examined the association between dietary nutrients and sleep symptoms.

Of course, drinking any beverage before bed is a balance between risk and benefit–you may reap the health benefits but, if you drink too much, you risk waking up to have to tiptoe to the bathroom in the night

Posted on January 24, 2021, in Uncategorized. Bookmark the permalink. Comments Off on 6 bedtime drinks that can boost weight loss overnight.

← Could coffee be the secret to fighting obesity?
The pill effects adolescent bone development. →