Myths about back pain that make it worse

Is your sedentary time racking up during the pandemic? Spending more time on Zoom calls? More time catching up on Netflix series? Less time exercising? Then you might be one of nearly 65 million American adults who has experienced a recent episode of back pain. 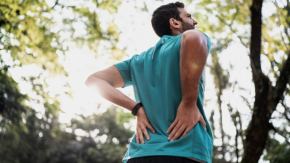 Activity, not rest, is often the best treatment for back pain.

Back problems are among the most frequent complaints to doctors. They drive up healthcare costs by more than $12 billion annually, making back pain the sixth most costly condition in the United States. For 16 million adults—that’s 8% of the U.S. population—back pain is chronic and limits everyday activities.

How can we prevent or reduce back pain? After decades of research, the scientific community has found the answers, but they remain overshadowed by widely held myths and misconceptions. In this article, we explore three common myths surrounding back pain, and why people should consider what may initially seem counterintuitive to find relief.

What research says: James Rainville, MD, assistant professor of physical medicine and rehabilitation at Harvard Medical School, said that back pain is a natural part of aging, just like getting wrinkles and gray hair, and that there’s no evidence that being careful will slow the process.

But here’s where it gets tricky: Despite the fact that most cases of back pain are part of the deteriorative aging process, many also stop being painful over time without assistance. How? Dr. Rainville says it’s not because our backs become healthier or stronger (although that certainly helps, but more on that later), but because neurological healing processes are taking place. When a problem occurs that triggers pain, like a bulging disc or spine degeneration, the nervous system eventually adapts to the pain and eliminates the discomfort. Evidence suggests that more physical activity—not less—may actually help your nervous system adapt more rapidly and reduce discomfort overall.

One study noted that clinical practice guidelines endorse exercise therapy for persistent low back pain and recommend avoiding bed rest. The idea is that physical therapy slows muscle and tissue deterioration and improves function, helping prevent back issues from worsening. Along the same lines, too much rest promotes atrophy. Penn Medicine sports medicine physician Alexis Tingan, MD, recommends light aerobic activity, such as jogging, walking, or using a stationary bike, to reduce back pain, though he acknowledges that cases differ from person to person, and require careful coordination between patients, physicians, and physical therapists.

The takeaway: People suffering from common backaches and pains shouldn’t stop moving. In fact, they should find ways to safely add more movement into their day.

Myth #2: Avoid lifting heavy objects to save your back from further injury

What research says: Although moving an air conditioner or lifting heavy furniture can throw your back out, the truth is that only 5% of cases of new disc herniation and sciatica happen during heavy-duty physical activity. Most people experience new-onset back pain during simple tasks, like reaching for a pencil or bending over to brush their teeth, Dr. Rainville said.

That’s because back pain usually results from tissue failure caused by age-related deterioration. While lifting something heavy can be the straw that breaks your back, lighter exertion can also trigger back pain.

Fortunately, there’s a simple way to avoid (or at least delay) the deterioration that leads to most back pain: exercise. Most types of moderate exercise can help reduce back pain, but core-strengthening exercises may pack the most punch. A study of 30 patients with back pain found that core muscle strengthening exercise, along with lumbar flexibility and gluteus maximus strengthening, was an effective rehabilitation technique for patients with chronic low back pain, regardless of how long they’ve had pain.

According to Cleveland Clinic physical therapist Patti Mariano Kopasakis, PT, DPT, weak lower back muscles force the body to rely on passive structures for stability, like bones and ligaments, which causes pain. Stronger muscles help bear the load, reducing the likelihood of deterioration, injury, and pain.

The takeaway: Back pain is more likely to be caused by bodily deterioration than overexertion. Exercise is one of the best defenses.

Myth #3: Surgery is the best way to treat back pain

What research says: Surgery should be the last line of defense against back pain. Spinal fusion, one of the most common surgeries for back pain, can work for some, but it often fails to offer lasting relief, typically only reducing back pain by about 50% over a few years. “Based on the evidence, the indications for fusion are few and far between,” said Steven Atlas, MD, MPH, associate professor at Harvard Medical School, in an interview with Harvard Health Publishing. “But that doesn’t stop surgeons from doing them and patients from getting them.”

More conservative, non-invasive measures like exercise, physical therapy, heat/cold treatment, and good old-fashioned waiting-it-out can be just as, or more, effective, while reducing the risk of surgical complications. But these tactics tend to require a much longer commitment and, depending on insurance coverage, can be more expensive than surgery.

Some studies show that meditative approaches can be effective, too. In one study published in the Journal of Evidence-Based Integrative Medicine, researchers found that for almost 300 adults with chronic low back pain, an 8-week mind-body program modeled on Mindfulness-Based Stress Reduction (MBSR) significantly decreased long-term pain and increased short-term function.

The secret lies in tapping into the complex brain networks we use to process pain. “When engaged in mindfulness meditation, the networks that regulate pain are engaged and include the emotional, sensory, and cognitive networks, top-down pathways, as well as the parasympathetic network,” the authors wrote. “Mindfulness, therefore, engages a variety of pathways to regulate the experience of pain.

The takeaway: Surgery is not a cure-all for back pain and should be considered as a last resort for most people.

Perhaps because back pain is so prevalent, myths cloud the reality of back pain’s big picture. Getting too much rest, avoiding physical exertion, and counting on surgery to solve problems we can usually fix ourselves may seem like reasonable tactics, but they’re actually harmful mistruths that make the burden of back pain much more severe.

Posted on September 19, 2020, in Uncategorized. Bookmark the permalink. Comments Off on Myths about back pain that make it worse.