← Endocrine disrupting chemicals – is there any larger, more neglected health problem?
Why women see their GP more than men → 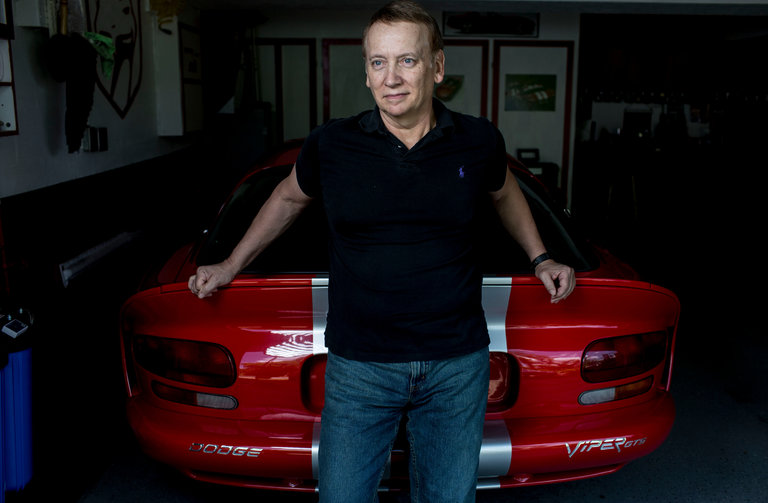 Bruce Perry of Charleston, W.Va., said his doctors never discussed active surveillance when he received his diagnosis. CreditRaymond Thompson Jr., for The New York Times
Seemingly overnight, treatment of men with early-stage prostate cancer has undergone a sea change. Five years ago, nearly all opted for surgery or radiation; now, nearly half are choosing no treatment at all.

The approach is called active surveillance. It means their cancers are left alone but regularly monitored to be sure they are not growing. Just 10 percent to 15 percent of early-stage prostate cancer patients were being treated by active surveillance several years ago. Now, national data from three independent sources consistently finds that 40 percent to 50 percent of them are making that choice.

In recent years, major research organizations have begun to recommend active surveillance, which for years had been promoted mostly by academic urologists in major medical centers, but not by urologists in private practice, who treat most men. In 2011, the National Institutes of Health held a consensus conference that concluded that it should be the preferred course for men with small and innocuous-looking tumors. Last year, the American Society of Clinical Oncology issued guidelines with the same advice.

The data includes a large new national registry established by the American Urological Association involving 15,000 men nearly all treated by urologists in private practice through 2015; a national registry of 45 mostly private urology practices; and a Michigan registry of mostly private urology practices. In addition, preliminary 2016 data from the urology association indicates that the numbers are growing, with even more than 50 percent of patients choosing active surveillance.

“Things are changing very, very quickly,” said Dr. Matthew R. Cooperberg, a urologist and epidemiologist at the University of California, San Francisco, who has been helping collect data for the new American Urological Association database.

Half of all men with newly diagnosed prostate cancer have low-risk tumors, which pathologists, using a scoring system that looks at the appearance of cells under a microscope, rate as Gleason 6 or less on a commonly used scale. Their risk of dying from prostate cancer in the next 10 years is less than 1 percent, whether they have aggressive treatment or whether they choose active surveillance, research shows.

Nothing, though, is straightforward in the cancer world. Is everyone with a cancer scored as Gleason 6 or lower a candidate for active surveillance? It is not clear.

It is an easier decision for older men with a life expectancy of 10 to 15 years because most prostate cancers that grow do so very slowly. But what about men in their 50s or early 60s?

These men will need to have regular biopsies for long periods of time so doctors can look for signs their cancer might be growing. Biopsies, though, can result in infections that can be serious and can miss more aggressive cancers because they examine only tiny snippets of the prostate.
That leads to a dilemma for younger men, said Dr. Jonathan I. Epstein, a pathologist at Johns Hopkins Hospital. They have a longer life expectancy during which their tumor might grow and become more aggressive. Yet, he said, “it is the young men who really want to avoid radical treatment for their cancer as the complications, such as impotence and incontinence, affect them to a much greater degree.”

Dr. William Catalona, a professor of urology at the Northwestern University Feinberg School of Medicine, said he worried that some younger men may find out too late that their cancer has become incurable. Active surveillance, he warned, “is a tragic mistake for some.”

Yet some doctors are beginning to question whether these tumors should even be called cancers. Dr. Cooperberg argues that the lowest-risk tumors need a name that conveys their languorous growth and generally benign nature.

“There has to be some terminology that doesn’t say it’s normal but doesn’t use the C-word,” he said.

Others, like Dr. Justin E. Bekelman, an associate professor of radiation oncology at the Perelman School of Medicine at the University of Pennsylvania, are not ready to drop the word “cancer.”

“They have an excellent prognosis, but it is still cancer and we have to follow it carefully,” he said.

Without the word “cancer,” Dr. Epstein said, men may not take seriously the need for regular biopsies and other tests. He and his colleagues at Johns Hopkins proposed a grading system to make it clear that Gleason 6 cells are less frightening than higher-grade tumors, but not necessarily benign.

In the Gleason system, which involves a pathologist’s assessment of how ominous the prostate cells look, 6 is actually pretty much the lowest score for cells that are cancer, despite the Gleason scale officially starting at 2. The highest is a 10. But many men, hearing that their cancer is a 6, assume the worst.

In the new system, which has been endorsed by the World Health Organization, instead of calling the cells Gleason 6, they will be called Group 1 in a scale that goes from 1 to 5.

One issue complicating the active surveillance questions, said Dr. Alan J. Wein, the chief of urology at the Perelman School of Medicine, is that the long-term outcomes are unclear.

Sign Up for the Science Times Newsletter
Every week, we’ll bring you stories that capture the wonders of the human body, nature and the cosmos.
“We need follow-up of at least 10 to 15 years to be sure we are not hurting these people,” he said. “The problem is we’ve been in the active surveillance business only since about 2000, and everyone started off very, very slowly. No one really has a number of patients who have gone for years and years.”

Dr. Wein advocates active surveillance for most men with low-risk cancers. But he emphasizes that they should have a second biopsy within a year, followed by regular biopsies every year or two and regular PSA tests, a blood tests that looks for a protein linked to prostate cancers.

“I tell patients, this is a bet,” he said. “You are betting that the disease is not going to progress, or if it progresses, you will be able to tell before it progresses to a situation where it is less treatable. You enhance the chances of winning the bet by doing a confirmatory biopsy.”

Mike Steskal, a commodities trader who lives and works just outside Philadelphia, decided to take the bet. He is 55 and was told last summer that he had prostate cancer after his doctor ordered a blood test for flulike symptoms that happened to include a PSA test. His PSA level was slightly elevated, which led to more tests, including a biopsy that showed a Gleason 6 cancer.

Mr. Steskal spent months seeing different doctors, most of whom recommended aggressive treatment because he is so young. He also researched prostate cancer on the Internet and talked to men who had gone through various treatments. Finally, he chose active surveillance.

As part of the surveillance, he had two more PSA tests. They came back with levels so low that no one would ever have suspected prostate cancer. His higher level last summer was probably due to an infection, which can cause PSA levels to rise.

“It was pure chance” that he got a prostate cancer diagnosis, Mr. Steskal said. “That’s another thing that went into my decision.”

Bruce Perry of Charleston, W.Va., who was a similar age when he received a diagnosis of prostate cancer, said he wished he had had a chance to make that bet.

He was 57 when he learned he had a Gleason 6 cancer in 2010. “I’m like, ‘Oh my God. That is a bad cancer,’” he said. “The problem with men, when they find out they have something like this, it’s like, ‘Get it out now, I don’t want it in me.’ With prostate cancer, I now know that’s not the right attitude.”
The operation was not so bad, but its consequences were difficult, he said: “It took almost a year for me to feel confident about going out and doing anything without wearing protection.”

“The sad part is that that wasn’t really offered as an alternative,” Mr. Perry said.

Posted on January 15, 2017, in Uncategorized. Bookmark the permalink. 2 Comments.

← Endocrine disrupting chemicals – is there any larger, more neglected health problem?
Why women see their GP more than men →